Money is rushing into biotech at breakneck speed this year, and one part of the globe is accounting for much of the uptick: China. VC deals were teeming with Chinese investors in the first half of the year, with China-based firms participating in US biotech investment rounds worth $5.1billion, according to data from PitchBook. For some perspective, that beats 2017’s total figure of $4 billion — and we’re only six months into the year.

This is a trend that started last year, with Chinese investors participating in a third of all biotech funding rounds in 2017. Local investors teaming up with Chinese funds say the region has an insatiable appetite for biotech, with money flowing less and less to areas like real estate in favor of the returns in healthcare。 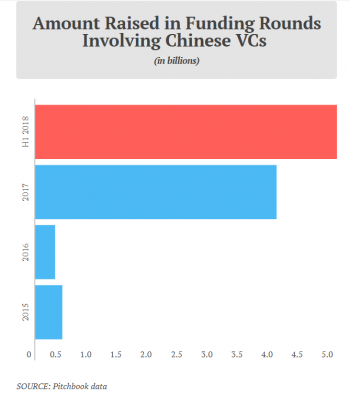 In a recent interview, Duane Kuang from China-based Qiming Ventures said biotech was the most exciting new area for investment. “We had this phenomenal run in healthcare, from devices to targeted diagnostics and lately we’ve spent quite a bit of energy on biotech — on the more innovative drug discovery part of healthcare investment,” Kuang said. “That’s one area we continue to be excited about, and we’re likely to (dedicate) additional manpower to this area.”

Total biotech investment dollars are booming like we’ve never seen before. In the first half of the year, we’ve counted at least 12 mega-rounds totaling more than $100 million. That’s including massive rounds like Grail’s $300 million raise, which was studded with numerous Chinese investors and led by Hong Kong-based Ally Bridge Group alongside Hillhouse Capital Group and 6 Dimensions Capital.

With all this activity and interest from the region, we decided to track down the most important people you should know in China’s VC scene. We polled connections over to the globe to pare our list down to these 12 investors. Check out what we know about each below.

Frank Yu founded Ally Bridge Group in 2013 with a vision to be a “truly global healthcare investment group” — featuring plans for both transpacific and transatlantic deals. Two years later, the firm played a lead role in taking WuXi off the market for $3.3 billion.

“If you asked me, that was certainly the perfect target, except we had to pay rich valuation to take it private,” Yu told China Money Network. That said, he’s stayed flexible about the sizes of deals he’d get involved in, willing to shell out hundreds of thousands or hundreds of millions of dollars as he sees fit. Since then, he has also invested in Tesaro and Sorrento Therapeutics — both US biotechs with China ties — alongside several medtech companies, and is sitting on the boards of ImmunGene and Hua Medicine.

Ally Bridge made a splash weeks ago by leading a $300 million round for Grail, amid rumors of a Hong Kong IPO, a move fitting with their new strategy to focus on “very high-impact, big ticket world-leading deals,” Yu told Endpoints News. That comes at a time the fund has $3 billion under management, ample to help fuel what he sees as an irreversible trend: “There will always be winners as well as losers. We will all learn.” — Amber Tong